Taigam, Ojutai Master
This topic has been deleted. Only users with topic management privileges can see it. 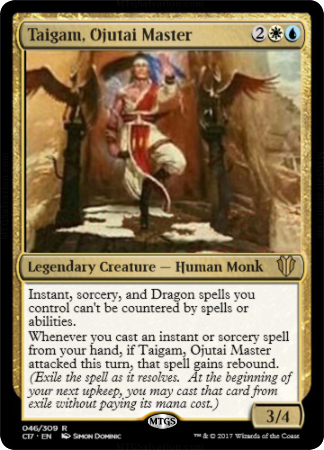 I like everything about the card, I even think its costed reasonably ( given its abilities).
Any thoughts?

I'd pick up a set at least for a fun extra-turn build. Doubtful it's competitive, though, especially with Chalice restricted. On the plus side, he's a human...

I agree. As a cc4 card, it has to be as efficient as a Jace to be interesting in competitive decks. That being said, i like the card because when you read it you just can't help but think about what deck could be built around it because of its potential. Fun card for casual play (or other formats)

Yes sure. I was just saying that for 4 mana you would want a card that would end the game in a few turns. Is it so ? I don't know but i give you that in U-mirror matches it could be better than Jace. Its strong body coupled to the fact that it needs only to attack and not to damage opponent is a clear plus. On the other hand, against mentor and its token it could die quickly when it attacks while Jace would stay safely behind.

If they have enouph mentor tokens to block and kill this favorably they probably also have enouph to attack Jace and kill him.

Where is this card from? Is it a new card that was just previewed?

@walking.dude I meant you must attack with it (at the risk of loosing it if there are enough blockers) to generate some CA whereas Jace has no such requirement.
However i don't know if comparing it to Jace is relevant but i am wondering if it is worth its cost (decisive enough) for competitive use.

@walking.dude It's from one of the upcoming commander decks.

So lets say you stick this and now your instants and sorcieres and dragons can't be countered. What's the next step from there?

@MaximumCDawg At that point you resolve all your high CA bombs; treasure cruise, digg, ancestral. You can also counter anything your opponents casts without a counter war.

I would love it if this guy were good. Such a fun premise and powerful but fair effects. Unfortunately, Mentor costs one less colored mana and changes your other spells into "who cares if they counter this, you're already winning".

No way man! Jace is a format defining card. He literally changed the way we play Vintage. This card is a situational hot mess; needs good cards in your hand and mana to play them in addition to having this in play...

No way man! Jace is a format defining card. He literally changed the way we play Vintage. This card is a situational hot mess; needs good cards in your hand and mana to play them in addition to having this in play...

So let's say you have good cards in hand, which you'd be happy to rebound / make uncounterable. Would you rather have this guy or Jace?

If you resolved a 4 mana "bomb" (let's just call it that), I think the next thing you play is going to resolve, so the uncounterable effect is misleading.

The rebound would only work for small draw spells like Preordain or Brainstorm. What else would you want to rebound that makes it all worth the cost? So at the end of the day, you're just playing a more limited Jace TMS if you go that route.

If you resolved a 4 mana "bomb" (let's just call it that), I think the next thing you play is going to resolve, so the uncounterable effect is misleading.

Fair. My point is just that there's an upside, at all. Cards that are often worse but sometimes better than other cards that already see play are likely to themselves see play, at least marginally.

@desolutionist to be fair, there are definitely times this would be better. (Is your opponent at two? Do you have a game winning instant or dragon in hand already?)

If you follow that to its logical conclusion though, you're almost definitely right. How often do those situations happen?

Most importantly, if you were to build a deck that maximized the odds of those situations happening, what would that look like? What would you have to sacrifice to do it? My expectations for the card aren't great, but I'm curious to see if anyone comes up with a list for it

@Brass-Man the card just seems too situational to build a deck around that would be consistent. Especially to run it over the best blue four drop ever printed.
Even basing a deck around this seems contrary to how we want to play vintage. It is a good card in certain situations, creating a deck to create those situations just seems inconsistent at best. Hoping for a random situation to arise in which this card hits the board, doesn't die, and then seriously impacts the game more than Jace seems even more rare.
You could run a deck based around triskaidekaphobia which would be amazing if you create situations around it, but would it be successful? This might not be that extreme, just seems hard to take over a jace and create a list that still looks as competitive, in my opinion.

Someone further up thread made a joke about pairing this with extra turn effects, but that might be the best way to use it.

Maybe this guy, the new RU regrowth prowess guy, bosujitsu, and a whole bunch of time walk effects. If there was s reliable way to lose life, that 3 mana time walk that only works at 5 life or less could go into this deck.

Those are the places this really shines over JTMS

@John-Cox Not saying I disagree with you, but just be a little careful that when you are comparing it to Jace, that you aren't having it play against Jace. You should be looking at common game nodes and saying, ok, in that spot would I rather have a Jace or Taigam. They are competing for the same deck slot, not attacking each other.

Against shops? Well Taigam will be something like twice as easy to cast since 9 taxing effects hit Jace and 5 hit Taigam (assuming they play Lodestone), but if it hits is Jace better? It lets you draw immediately, where Taigam's uncounter-ability is of limited value (chalice only) and everything costs more to cast... But Jace gets attacked directly. But Jace also can bounce... ok it feels like in the range of common came nodes against Shops, this guy might be mildly better than Jace.

Against Tempo-Blue? Well its counter ability feels great, though its very unlikely to get used right away. If you are casting this guy you are almost certainly tapped out, so not playing another insta/sorc that opponent would fight over. It does make your counterspells untouchable, so I guess it's going to be extra good when you hold a Misstep, since there will be spots where you resolve this, they Swords, you Misstep, and the Misstep they are holding is useless. If they are holding Force, they will just fight over this thing directly, and if you win it will likely just sit on the board for a turn. Jace activates immediately, and circumvents Sword entirely. Again, Jace can be attacked directly, but that's after a brainstorm effect. Beyond that I'm having a hard time finding game nodes where he's really worse? Are we running Cavern to cast this thing? Maybe that's how we make this thing way better than Jace. 4 Caverns, 4 of these, 4 Snapcaster and a ton of broken spells? Splash green for Regrowth and Eternal Witness and Sex.dec? Maybeeee?