[HOU] Tragic Lesson
This topic has been deleted. Only users with topic management privileges can see it. 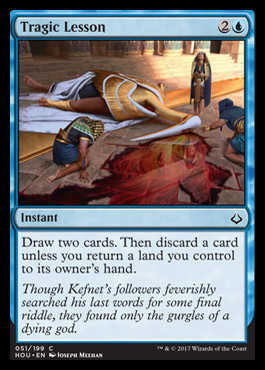 Tragic Lesson
2U
Instant
Draw two cards. Then discard a card unless you return a land you control to its owner's hand.

Instant speed? Check.
Can cost 1 less if you play it on your main phase? Check.
Fills your hand for Dack/LoA? Check.

I'm always interested in instant speed Divinations. This one fills your hand quick. Comparing it to Thirst for Knowledge has ups and downs. TfK digs deeper, but this leaves you with +2 cards in hand. TfK at best is a +1 (I'm not talking CA, but cards in hand for Dack/LoA as I mentioned before).

@fsecco I like this card. the 3 mana is a bit much against thorns/sphere. But any games where they try a turn 2 or 3 wasteland before they have a sphere out, this card is really nice.

The greatest thing about this card is that you're not forced to get the land back. If you draw into junk and don't want to lose the tempo of a land drop, just discard something. Having the option is great.
And I haven't thought of it, but yes it can save LoA from Wasteland (I don't think we've ever had a playable card that did this before).

Playing in response to a wasteland is the most interesting part of this card.

3 mana to draw 3 is situationally played in Vintage (thirst if you are in an artifact heavy deck). This has a good chance because despite drawing 2 instead of 3 you can actually keep the 2 you drew if you wanted.

This is much more comparable to compulsive research and TfK because it a fixed card draw. I see it as better then CR because it is instant speed. And its situationally better or worse then TFK depending on the deck build. I like this card. I think it will see some play here and there but it won't make a major impact on vintage.

Are there any worthwhile "enter the battlefield" abilities that would be useful if repeated via this card? Bojuka Bog vs dredge comes to mind but I'm wondering if there are any others...

Returning Academy, Workshop, Library, Karakas, Cradle, Ancient Tomb, City of Traitors, Serras Sanctum, any of the scry lands, or even a cycling land could all prove advantageous if you have not made your land drop. I could see this card plus frantic search do great things for filtering and possible huge mana advantages. I would still play PO in most of those circumstances, but who knows it may have merit and find a home.

This seems like money right here. Not good enough on its own, but Gush++ seems hilarious.

Outcome has a much higher upside and obviously chains together in ways this card could never, however this is a hilarious attempt at gush 2.0. I'm sure this will see play online, even if it never works out long term...

I never said gifts/PO were better as an argument here. I said they were different, meaning I don't feel they are in the same class and therefore not good to use as comparisons. When I made the observation about the CC I was speaking of this particular card. I even started out my comment by stating "this card," in the opening sentence.

I fully stand by both of my posts. This card has potential, but could suffer against thorn/sphere because it costs 3 for only 2 cards. And its not comparable to gifts/PO because those 2 cards do so much more that they are potentially worth the extra mana you have to pay against a thorn/sphere effect.

But please, in the future try to find a way to continue a discussion rather than telling somebody they cannot make new points. That really kills conversations.

Sometimes the land bounce can be utility, but I imagine it won't most of the time. As a pure draw spell, there's a lot of stuff that draws 2 at 3 mana and feels stronger than this?

That doesn't mean that Tragic Lesson is a dead end, but it DOES mean that it's less good at drawing cards than cards that are currently not played in the format.

That means that IF this card is playable, it HAS to be in a deck that uses "bounce a land" as upside, rather than a drawback. I wouldn't look at this card with anything that didn't have an explicit plan around that.

Maybe try to run this with lots of looting effects? (Dack might clog you at 3 unfortunately, but JVP is a nice fit)

Fastbond gives this card no drawback and kind of reduces the cost by 1 mana if you're chaining spells, but "build your own Night's Whisper" doesn't feel good to me unless you were already playing Fastbond in your deck for other reasons, and I'm not sure what sort of deck right now would want a Fastbond, but I know there are more creative minds than mine out there.

"Save a land from Wasteland" is a nice bonus for sure, but you can't really build around that. You would never board this card in specifically to beat a shops deck - you're still down a land drop and it costs you a huge amount of mana. Using Gush to defend yourself from Wastelands out of Shops was never that exciting. It is a nice little extra that might come up if you were already running the card, though.

Any other ideas specifically to turn "bounce a land" from a drawback into an advantage? I think without solving that problem the card is a nonstarter.

This is what I meant. Of course they're different cards. But I wasn't evaluating anything other than CMC.

HUm, I feel this is better than all of those, maybe on par with Vortex and Epiphany.
Charms and Succumb to Temptation are color heavy. Pulse is conditionally CA, and a hard condition to meet.
Cerebral Vortex is awesome, but using it on your own turn has only downsides (pay 1 extra life, or more). If you find Vortex after a Brainstorm or whatever, you're suffering.
Epiphany is the closest, but it IS conditional, while Tragic Lesson is not. Lesson will always be CA +1 if you want it to be. The only condition is your own choice. I feel it's quite superior to that.

So yeah, none of those are actually played in the format, but I feel they're all worse than Tragic Lesson to some extent. So I don't think it's that easy to evaluate. Of course you won't play a lean mana base, and maybe missing a land drop will hurt more than help, but I really think this deserves at least to be on our radar.

I think it's best for picking up mainlands to defeat fatal push or picking up cycling lands to keep digging, but that's not plays needed in vintage.

If I'm being 100% honest, I think I'd rather have Divination in most decks, but I'm trying to keep an open mind

@fsecco seriously not. I think people overvalue instants vs sorceries in vintage, and I think most of the time "bounce a land" is going to be a bigger drawback than sorcery speed is, for most decks, unless you explicit build around it.