[HOU] Hollow One
This topic has been deleted. Only users with topic management privileges can see it. 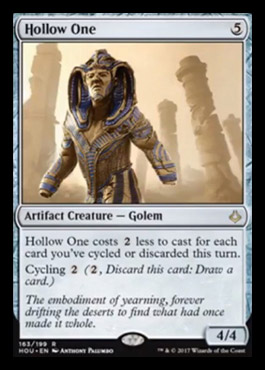 Costs 0 if you activate Bazaar of Baghdad. Sounds interesting enough. Activating Bazaar turn 1 and playing 1 or 2 of these could be good.
I remember a time Shops played with Bazaars. I wonder if having a 0 mana 4/4 is good enough to make Uba Stax good again.

I like this and I think It will go great in a shops list that utilizes bazaar.

@p3temangus lol i definitely wouldn't run precursors with these, something tells me it would make their removal spells way more cost effective

I wonder if this is any good in a transformational Dredge SB so you can still make your Bazaars generate speed.

Thinking about this now, this might be better off in a dredge deck haha. I such a soft spot for shop builds that leverage bazaar though. I'm still going to fool around and test this card in a bazaar-shops build for sure.

This is an interesting card. I looked over it when it was spoiled but the card is defiantly worth another look because of its synergy with bazaar.

I don't think shops would ever want to cycle a creature like this. What else would you be looking to draw?

However, it does play well with Dack Fayden and wheel of fortune.

After thinking about it more, I actually don't think this would be a maindeck choice in dredge by any means as it is not a creature that comes back from the grave. Only testing will tell though.

The bad side of this is that it's too situational. You need Bazaar in order for it to work (since I don't think there are any other good cycling or discarding cards for shops or dredge. Maybe a Fluctuator deck that plays 3-4 of these turn 1?
Anyway, imagine topdecking this. Shops can pay 5 mana easily in topdeck mode, and if it's not what you want, the cycling comes in handy. I think it deserves at least a bit of testing.

ps: just remembered Mindless Automaton as a discard outlet, but that feels slow.

@fsecco The discard outlets that come to mind are razormane masticore, smuggler's copter, bazzar of baghdad and daretti, scrap savant. Daretti is probably the least playable in a shops brew because it costs 4 mana(none of which can be paid for with workshop) without factoring in resistors. The discard outlets allow you to discard lands that can be brought back with crucible or artifacts that can be brought back with goblin welder. You could also run squee, goblin nabob as a card to fuel your discard engines, however, I have had very limited success with it in testing.

I really like this card - seems like it has a LOT of brew-room built in with all of the discarding outlets available in Vintage. Bazaar, Dack, Wheel of Fortune. I don't know for sure if it is good enough to make the cut long-term but it sure looks like it ought to be worth testing!

I don't know, the guy is still just a 4/4. That doesn't seem too impressive on its own. Remember that Myr guy that cost 2 if you played a spell? That never saw play and that was a 5/6. I think we need to be doing a lot more than putting 4/4's on the battlefield to make it viable in this format. Casual all star for sure though.

In dredge I think the interaction is more so playing this for free t1, sacking it to cabal therapy, getting some tokens and starting your engine if you got a fast start. But if that was a thing the deck really needed to do it could run ornithopter since its just going to get binned.

It's a cool card, but I don't think it's home is vintage as much as it will be in Modern where people play Faithless looting.

It's close. A 5/4 or 4/5 would have been helpful obviously. The main selling point is that it sidesteps all the hate and is a reasonably fast clock if everything goes well. For example as a turn one play while you search for anti-hate you attack on a different axis that is a reasonable clock. Arguments about bad situational cards sometimes don't apply to the traditional dredge builds because of how the deck operates, card that in a vacuum are draft box refuse are all-stars in dredge.

Myr Enforcer tells us that a free early-game 4/4 is certainly a powerful piece of pressure in the right deck. Does Hollow One have a right deck, though?

The main tension is between the need for an aggressive shell that can make use of a 4/4 with no abilities, and the fact that to play him for cheap, you have to discard 3 cards in the early game, when most aggressive decks are pinched on card advantage already.

The idea of using him as a means of playing Cabal Therapy on the first turn has some merit, but I think the opportunity cost of Hollow One in the dredge deck is just too high. For the purposes of disrupting the opponent, is gambling on Hollow One + Therapy better than running Unmask? I also don't think the extra power on Hollow One is worth the loss of versatility over Bloodghast or Ichorid, after the first turn.

What are the Vintage-playable Madness cards? I agree completely with fsecco that Bazaar alone makes Hollow One far too inconsistent, but I wonder if cards like Careful Study in a madness shell are more reliable than Fluctuator.dec.

Definitely a dredge playable. 0 mana 4/4 with bazaar, and the cycling helps for when you don't have Bazaar.

I would venture a guess that this guy could be his own dredge variant if you are not relying on Dread return at all and instead are loading up on self returning dorks. Obviously dropping 2 of these turn one is a scary and unlikely start, but more realistic is probabaly turn one Bazaar and hopefully discard a dredge card and a bloodghast, follow up on turn 2 with ground power.

Once you start using this to pay for Cabal however, it loses a lot of its utility.

The more I think about it, the more I expect this to be played in dredge. It gets around all the graveyard hate.

Meanwhile, it has this ancillary ability that allows you to draw a card (or dredge) if you need to.

@gkraigher said in [HOU] Hollow One:

The more I think about it, the more I expect this to be played in dredge. It gets around all the graveyard hate.

Meanwhile, it has this ancillary ability that allows you to draw a card (or dredge) if you need to.

I totally agree. Not to mention, oftentimes opposing decks water themselves down quite a bit to bring in so much dredge hate, it's quite conceivable that a 4/4 could go the distance.