[HOD] Scavenger Grounds
This topic has been deleted. Only users with topic management privileges can see it.

2, t, sacrifice a Desert: Exile all cards from all graveyards. 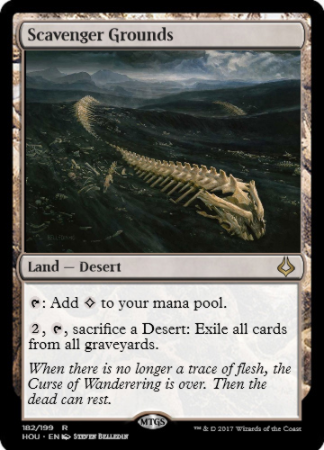 It will compete with all the other colorless lands, but the effect is certainly playable. Perhaps better than Tormod's in Workshop decks?

@enderfall exactly. The first home I thought of was some sort of eldrazi. It seems especially well placed in eldrazi that wants to run Null Rod... I wonder if it could even be brought in against decks that run Baby Jace.

is this better than Bog?

I agree that it's in the conversation, and all Ancient Tomb decks will consider this, but it doesn't seem like a snap include in the 75.

It is absolutely better than bog in that it immeditately taps for mana AND you can choose when to use it. It also dodges all current Dredge hate - from Pitch Counters to removal. Dredge will have to play Pithing Needle, Strip Mine, or Wasteland to avoid this. Or do the Dark Depths plan, which is terrible and easy to plan for/stop.

@MSolymossy I tend to agree. This is an upgrade over Bog in most cases. The only case I can think of where Bog is better is if you need to nuke a graveyard on turn 1 or 2 against a fast Dredge draw, and you can't generate the other 2 mana. But, that's a pretty narrow situation.

@mediumsteve I don't know that its a snap include. I would guess that entirely depends on your meta, since it this doesn't do anything to proactively win the game beyond tapping for 1 colorless... If you aren't ever going to play against a deck that uses its graveyard, then this thing is basically useless. In that scenario, a basic Wastes if likely better...

But 20% of top 8 decks run JVP, 9% run Crucible, 8% run Bazaar... assuming only a small overlap in those decks, we can guess that this thing is live against about a third of the field, and maybe great against certain things like Bazaar decks and good against stuff like Standstill or certain Tempo blue decks that rely on Treasure Cruise, Dig, JVP... I can certainly see builds that use 1 in the main and several more in the side.

@Topical_Island Yeah, but you can say the same things about Bojuka Bog and that card sees play. I think that's the point: this card is almost certainly playable.

You do not keep in Null Rod against Dredge. So I suppose the question is "what is the intersection of decks against which I want both Null Rod and a Tormod's Crypt effect?" With DPS being dead, I can't really think of one. Might be okay in Eldrazi against the MUD matchup if they're still playing Crucible of Worlds.

A neat new option to have, that's for sure.

You do not keep in Null Rod against Dredge. So I suppose the question is "what is the intersection of decks against which I want both Null Rod and a Tormod's Crypt effect?" With DPS being dead, I can't really think of one. Might be okay in Eldrazi against the MUD matchup if they're still playing Crucible of Worlds.

A neat new option to have, that's for sure.

What does dredge do against this? Ingot Chewer, Whispmare, Abrupt Decay, Sudden Shock, Chain of Vapor, Barbarian Ring, Cabal Pit, Emerald Charm, Darkblast, Contagion, Unmask Mental Mistep, Force of Will, and Mindbreak trap are all the cute tricks I've seen off the top of my head that they play, and none can interact with it.

Leyline of Singularity, or the Dark Depths/other Man Plan is the only thing that interacts positively with this card, outside hope you kill 'em before they can activate Tormod's Workshop.

Leyline of singularity doesn't work because this land doesn't target.

Are you going to play other deserts to make this more than a one shot effect?

Leyline of singularity doesn't work because this land doesn't target.

Leyline of Singularity does nothing because it's not Leyline of Sanctity (which also doesn't work).

hope you kill 'em before they can activate Tormod's Workshop.

This is positively the strategy. Crypt is great because there is no control over when you can pop it. This card is not fast enough to stop quick dudes if you're on the draw. However, the fact that you can deploy it while also building up your board is a nice little boon. Perhaps that's enough to justify a couple SB slots to work alongside dedicated hate.

@MaximumCDawg I'm saying it's playable. I'm saying that it's better than Bog, and I'll even predict that it see's more play than Bog.

@cutlex No, for sure you don't keep Null in against Dredge, but it is also nice if your dredge hate has other applications. A singleton of this in Eldrazi for example, likely has a very small cost in terms of slowing your own deck, while having a potentially huge effect against Crucibles, JVP, Yawgwill, and other corner cases, and it's potentially mainboardable in a deck running Null Rod... It's lack of negatives, as much as it's positives, convince me that it will see play.

Wouldn't it be more useful main deck to prevent delving through sphere effects?

sometimes in a blue deck with 15-17 lands in it I'm tempted to add 1-2 lands to my sideboard just to keep up with spheres from shops. It's possible that this is useful on double duty as dredge hate and extra generic lands against shops. Worth some research.

@gkraigher I meant the Fucking white one lol

It's a shame that this exiles the sacrificed land, barring instant-speed shenanigans like Noxious Revival.

This seems very slow. Too slow against dredge. 2 mana + a land drop for an effect that usually costs 0?