[AKH] Failure / Comply
This topic has been deleted. Only users with topic management privileges can see it. 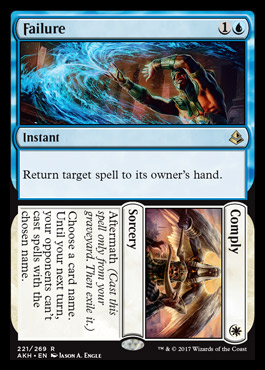 Failure / Comply
1U // W
Instant // Sorcery
Failure
Return target spell to its owner's hand.
//
Comply
Aftermath (Cast this spell only from your graveyard. Then exile it.)
Choose a card name. Until your next turn, your opponents can't cast spells with the chosen name.

This just occurred to me. I wonder if Comply is a good card for Dredge. It's almost like an extra Cabal Therapy that you can cast from the graveyard, although obviously worse since you actually need mana. But maybe having 8 spells to help you resolve Dread Return is good.

The card itself is not bad and reminds me a bit of Reflector Mage if you play it in a control build. Probably worse than Unsubstantiate and Remand in that role, though.

But do you think Dredge wants this? Seems good.

This might be ok as a singleton. It pitches to Force, gives you an out to anything, and has this weird flashback giving it some application game 1.

Costing mana makes it much much worse than Therapy though.

This card has a place in dredge. Not in all builds, but in some and meta dependent.

I think I'm missing something, it doesn't get rid of the card, and Comply isn't an instant so you can't use it as an anti-combo card like an Orim's Chant. Is the idea here that they have a card that will beat you next turn, but you will win if and only if you get one extra turn before they cast it? i.e. a more conditional Final Fortune?

Does this happen enough to be worth a spot over Unmask or Force of Will/Mindbreak Trap which answers a problem forever? Is there another scenario I'm missing?

I liked this effect when it was boomerang for spells or permanents back in Origins. Still do. But, it saw no play then. Not sure why it'd see play now, since this card seems just worse than the earlier version.

@MaximumCDawg I don't think it could see play outside of Dredge.

Against Storm you name Tendrils and can't die that turn, combine this turn after turn if you have them and you time walk storm alot, which is great for Dredge.

On top of being Dredge's Orim's Chant against Storm it can also pitch to Force of Will, if you're into that sort of thing.

To elaborare further on the comparison to Therapy. Its basically a therapy that only works for a turn and doesnt reveal their hand, but it does stop top decks. For most practical purposes it does function as a 5th Therapy assuming that your 2nd land drop is white producing (karakas/canopy/confluence are all good in dredge and all add W). While a 5th Therapy is not really necessary in most games, there are some where it can be huge. For instance where your opponent is loaded with Counters, or where you exile your Therapies with powder.

Stopping the top decks is a nice functionality that adds more to the card. Most of the time Dredge cant win until turn 3 so you are giving your opponent a chance to top deck.

It does need an initial Therapy for it to really do anything at all though, and it needs you to have that land drop. So you could argue that its only functioning in situations where you are already in a good spot

I think its place is next to Force. Finding good blue GY cards is very difficult. Thats why Amalagam has had such a profound impact on the viability if the Force builds. Trap, misstep, probe, ect. all have the issues of not working from your GY.

The "alternate" mode of casting it from your hand is marginal, but I could see scenarios where it buys you a turn, or combos with Therapy in some of the slower moving G2/3s.

While in the end both modes of the card are marginal, there is some nice potential for it to fill a niche gap in the dredge as a Singleton.

Whats the mana cost on this for Bob purposes?

You would lose 3 life by both the old rules and new rules.

Old rules: Bob sees both Failure and Comply revealed, so you lose 2 life and 1 life for a total of 3.

New rules: The CMC of Failure/Comply is 3 in all zones outside the stack, so Bob will cause a loss of 3 life.

@John-Cox Yeah, now it's 3 everywhere except the stack.

@John-Cox Yeah. It's just that the split cards rules changed last week. So you can't imprint Fire/Ice on Isochron Scepter anymore for example.

I think this has some merit in Dredge. Even the Failure Half can be good against hate, you Failure the hate card back into their hand, then Comply it so they cant cast it, then use that turn to find a therapy to permanently remove it.

agreed, the failure part of the card does something relevant. It's a pretty nice add on to a card whose primary function is something else.

It's 2 mana, actually, for Failure their turn then Comply during your turn. But yeah, using Failure is narrow. The greatest thing Failure does to the card in Dredge is being blue for FoW.

It's 2 mana, actually, for Failure their turn then Comply during your turn. But yeah, using Failure is narrow. The greatest thing Failure does to the card in Dredge is being blue for FoW.

I'm assuming three, as I don't see how a Failure stops a Cage or other low CC sideboard card. I would imagine someone casting a cage has the mana to cast it again if necessary.

@joshuabrooks it doesn't, but neither does Cabal Therapy. Although this CAN stop your opponent from drawing the hate he doesn't have if you need to give him 1 more turn.